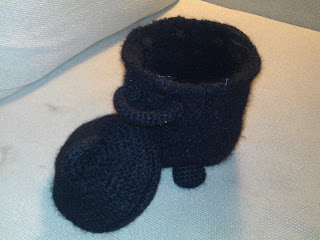 Just in time for Halloween! Make one as a table decoration and fill it with all sorts of gruesome goodies, or put a long handle on it and take it with you as a candy basket when you go Trick or Treating :) It measures 20cm across and 25cm from top to bottom before felting, and 17 and 22cm respectively after felting.
This basket is crocheted rather loosely and then felted. If you don't want to felt it you should adjust the hook size to get a firmer fabric. This will make a smaller basket, so you will probably need to use thicker yarn if you want a bigger, non-felted cauldron.
You will need:
* 6mm crochet hook
* Bulky pure wool yarn in black (make sure it's not Superwash - that won't felt!)
* Needle for sewing
* Small amount of polyester stuffing
Please note:
The cauldron, the lid and the lid handle are all made in joined rounds. Always substitute the first stitch of a round with 'chain 2' (this counts as the first stitch), and always close the round with a sl st in the first stitch. The legs and pot handles are made in continous rounds, so use a stitch marker to keep track :)
Special stitches:
There are two unsusual stitches in this pattern: The bobble stitch, and something I call triple increase, which is nothing more fancy than three sts in the same space :)
Make the bobble as follows:
*yarn over, pull up a loop, yarn over and pull through two loops on hook; repeat from * five more times, until you have a total of 7 loops on the hook. Yarn over and pull through all loops at once.  (The bobble will want to pop to the back of your work, and for this pattern that's the whole point :) In other patterns you have to poke the bobble to the front of the work with your crochet hook or something.) Continue crocheting like normal. 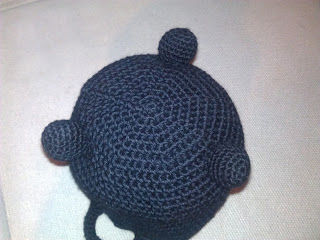 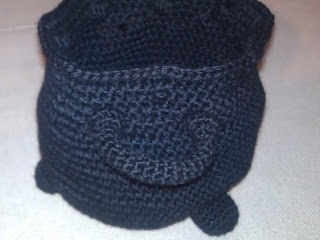 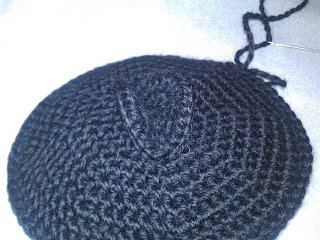 Then, fold the handle up along the stitched line and sew the edges together to make a half-circle. Weave in the ends, and you're done! :) 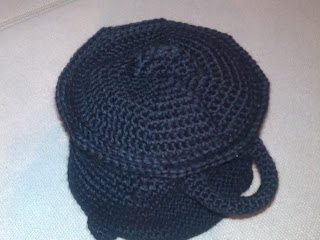 Felting:
Put the parts in the washing machine on a normal or quick cycle at 40-60 degrees C. If possible, use a setting with less water as this increases the felting. Put a pair of jeans or towels of matching colors in to help with agitation. You can also skip the spinning cycle at the end if possible, because this can cause creases in the felted fabric that will be hard to fix later. And remember it's better to use lower temperature and felt several times than to over-felt it the first time :) 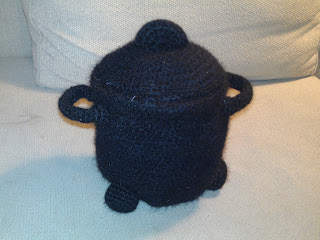 I felted the cauldron once, and then I stretched and pulled it into the shape I wanted before leaving it to dry properly.When it's dry, it will keep its shape nicely. Enjoy your cauldron and have a happy Halloween! :D
Posted by hattalahutta at 10:56 AM

In this blog you will find free patterns made by Hattalahutta. The patterns are (probably) not tested, so please contact me (see profile info) if you find any errors or mistakes :)

Since the patterns are free, you are allowed to sell any items made from these patterns, but please give credit to the creator, i.e. me :) You can also post the patterns on other sites, as long as you link back to this site. Please do not pass the patterns on to others as your own, for free or for profit.

More about me :p